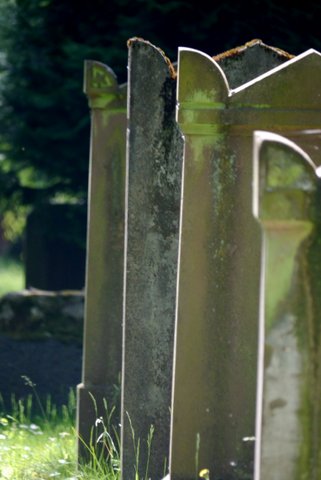 The parcel of 13 x 150 meters fullfilled all religious requirements: it was neither a built-up area nor agriculturally used. The tombstones, mostly made of sand stone or granite, are impressing by their great variety of shapes : steles, obelisks, framed plates or stylized thora shrines with diverse ornament elements. They are all aligned in the south-east direction to Jerusalem. The Hebrew inscriptions and symbols tell many touching life stories and fates of the deceased.

On the left beside the entrance was the mourning building which was destroyed by the Nazi. Today, high trees give shadow and calm to the area. Overall, 288 burials had taken place, including 56 spa guests and 36 children. The Soden spa guests often came as tuberculosis patients, already very ill, and hoped to be cured in the spa.

The most recent tombstone belongs to Moritz Strauss, erroneously dated to 1937. In fact, he died on 1938. Afterwards, two more burials were done, but without tombstones. 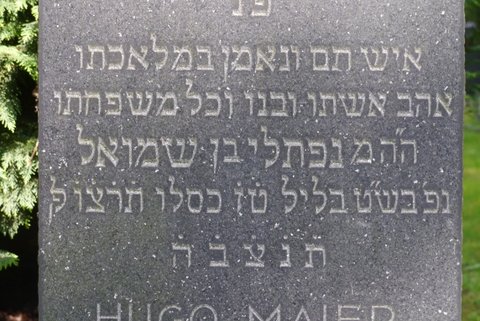 The graveyard is classified as Hessian Cultural Monument and can be visited on demand except on Saturday and on all Jewish holydays. The cemetery is normally locked. The key can be obtained, M-F (08:00 to 18:00) in the Bürgerbüro in the Paulinenschlößchen.

Here is a pass through the cemetery from the back to the entrance.

The next visitation dates for a guided tour by Ms. Hammerbeck.  The topics of the tour are – among others – the Jewish burial rites and storys about the people buried here. Curently, all are canceled due to the Corona Crisis security measures.

The meeting point is always at the entrance of the cemetory at the end of the Niederhofheimer Straße.

The cemetory can be found on the list of all Jewish cemetories.

If you are interested in more traces of Jewish peolpe, visit the web site of the Christian-Jewish Cooperation society of Main-Taunus.